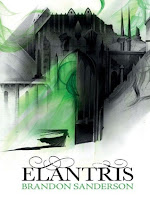 Elantris was built on magic and it thrived. But then the magic began to fade and Elantris began to rot. And now its shattered citizens face domination by a powerful Imperium motivated by dogged religious views.
Can a young Princess unite the people of Elantris, rediscover the lost magic and lead a rebellion against the imperial zealots?
Brandon Sanderson's debut fantasy showed his skill as a storyteller and an imaginer of baroque magical systems to be fully developed from the start. From Goodreads.

I enjoy Brandon Sanderson's fantasy books and this is no exception. Both Sarene and Raoden are very likeable characters. I liked that even though their marriage was arranged for political reasons they had communicated a lot and were looking forward to meeting each other. All the characters are interesting and have hidden traits and secrets. Even Sarene's dad who seems like a good king has secrets and he is just a small side character.