In her first adventure for British Intelligence Modesty Blaise with her loyal lieutenant, Willie Garvin, must foil a multi-million pound diamond heist. They travel from London to the South of France, across the Mediterranean to Cairo before battling, against impossible odds, a private army of professional killers. From Goodreads

I used to read Modesty Blaise as a cartoon and enjoyed reading about this woman who had an unbelievable tough childhood, became head of a criminal syndicate and when she had earned enough money she retired. This story is about how she comes to work for British Intelligence. I read this as a paperback and I unfortunately don't think I can find them in kindle. I will keep an eye out for them because I would like to read more of the books.

HARRY DRESDEN — WIZARD
Lost Items Found. Paranormal Investigations. Consulting. Advice. Reasonable Rates. No Love Potions, Endless Purses, or Other Entertainment.
Harry Dresden, Chicago's only practicing professional wizard, should be happy that business is pretty good for a change. But now he's getting more than he bargained for.
A duel with the Red Court of Vampires' champion, who must kill Harry to end the war between vampires and wizards...
Professional hit men using Harry for target practice...
The missing Shroud of Turin...
A handless and headless corpse the Chicago police need identified...

Not to mention the return of Harry's ex-girlfriend Susan, who's still struggling with her semivampiric nature. And who seems to have a new man in her life.
Some days, it just doesn't pay to get out of bed. No matter how much you're charging.

Not much to say here, I am still enjoying The Dresden Series. It is a kind of comfort book for me. Being delayed in an airport I needed something I was sure would capture me and hold my attention from the noise around me and I chose this, which was just right.

The path of true love never runs smooth. But for some, it's one seriously bumpy ride! A heartwarming new romantic comedy from the bestselling author of A WINTER'S TALE. Growing up in the beautiful Lancashire village of Neatslake, Josie Gray and her childhood sweetheart, Ben Richards, always dreamt of living a life of rural bliss. And when Josie inherits her beloved Grandmother's cottage, it seems they might just have got what they wished for. Josie throws herself into her wedding cake business, whilst Ben gains increasing acclaim as an artist. But the tranquil village turns into a hive of activity when Josie's childhood friend, Libby Martin - now a wealthy widow - returns to the village, planning a lavish wedding to rival any celeb bash.

The day goes with a bang, and soon Libby and Josie are hard at work at their fledgling wedding business, hiring out Libby's beautiful Elizabethan home for ceremonies, with Josie creating all manner of wonderful cakes. But amidst all this romance, Josie's fairytale relationship with Ben turns into a nightmare, and she quickly becomes Love's number one cynic - until charming wedding photographer Noah Sephton arrives in Neatslake with a very different outlook on love! Can this hopeless romantic persuade pessimistic Josie to give romance another try? Or will it be a case of always the cake maker, never the bride!? From Goodreads

As usual, a nice cosy romance with a predictable outcome. But I enjoyed it and I like the way she creates interesting sub-characters. In this book my favourites are the Grace sisters.

The Stars My Destination by Alfred Bester

Gully Foyle, Mechanic's Mate 3rd Class. EDUCATION: none SKILLS: none MERITS: none RECOMMENDATIONS: none That's the official verdict on Gully Foyle, unskilled space crewman. But right now he is the only survivor on his drifting, wrecked spaceship, and when another space vessel, the Vorga, ignores his distress flares and sails by, Gully becomes obsessed with revenge. He endures 170 days alone in deep space before finding refuge on the Sargasso Asteroid and returning to Earth to track down the crew and owners of the Vorga. But, as he works out his murderous grudge, Gully Foyle also uncovers a secret of momentous proportions . . . From Amazon.

I am not quite sure what to think about this book. It was compelling reading, it sucked me in and I just had to keep going and try to make head and tail of everything going on. I don't really see any good versus evil in this book. Nobody is entirely good, actually I think most of the characters are closer to evil than anything else. But it is fascinating and who wouldn't like the idea of being able to "jaunt", being able to teleport from place to place just with your mind. This is a very interesting book and I will look for more books by Alfred Bester.

The Snow People by Marie Herbert

When she knew she was going to marry an explorer, Marie Herbert saw herself waiting long months at home for news from distant, uncharted areas...
Within two years she was living herself in a remote settlement of Polar Eskimos.
Wally Herbert had developed a profound respect for these independent hunters - they called themselves "Inuit": the real people - when he travelled with them on polar expeditions and he wanted to help them make a record of their dying culture. Marie and Wally - with their 10-month-old baby, Kari - decided to make this record from within: to go alone, without camera crew or film unit, and live with the Eskimos.

Spirited, enthusiastic and sympathetic, Marie Herbert tells the fascinating story of a year of Arctic adventure: in doing so she has written an important anthropological account of a vanishing way of life.

This is a reread. The first time I read this book was around 10 years ago, at that time I did not know I was going to end up living in Qaanaaq only 18 miles from Qeqertassuaq, the settlement where Marie Herbert and her family lived. I decided to read this book again just now because after having lived here for two years I am now moving away. The settlement where Marie Herbert lived no longer exists, it is now used as summer home. It is still a harsh environment up here and it is getting more and more difficult for the locals to live by hunting alone. This problem is the same all over Greenland. Qaanaaq is still isolated even by Greenlandic standards. Two supply ships a year - one in July and one in September - 1 flight a week which is sometimes delayed (the last one was supposed to be here on Wednesday, it didn't arrive until Monday) and helicopter connections to the settlements and Thule Airbase.
I enjoyed this book as Marie Herbert tells the story of her stay and the tough daily life in a very fascinating and captivating way. Having lived up here but in a modern house I am full of respect that she managed to live in those primitive conditions. Don't mistake that, I also have a lot of respect for the Greenlandic women doing it.

I highly recommend this book. 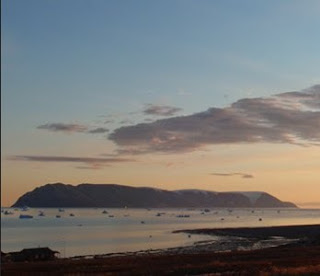 This is Herbert Island, the island Marie Herbert and her family lived on. When the light is right it is just possible to spot the houses of the settlement.
This picture is taken from my living room window.


This book qualifies for:
Goodreads 2012 Reading Challenge,
A-Z  Book Challenge 2012,
2012 Where are you reading Challenge
Posted by Unknown at 02:02 No comments: 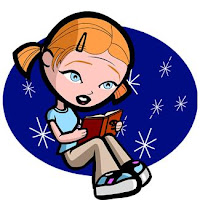 This month I have read 10 books and joined another two reading challenges: The A-Z Book Challenge 2012 and Finishing the Series Reading Challenge 2012.
I am satisfied with the amount of books I read this month.
All May posts are HERE
Posted by Unknown at 16:44 No comments: